There are many resources on deployment, maneuvering, and flying in formation, including these:

They're great resources, but I want to give you some easy-to-remember deployments to get you flying in formation quickly. I'll also discuss some general deployment principles below.

If you just want one formation to get you started, Formation 1 is what I use most often.

If I refer to ship bases, it's distance 1 for small ships and distance 2 for large ships. 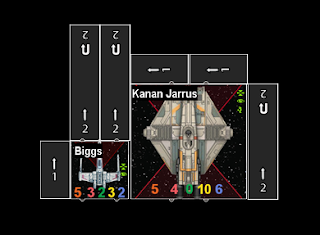 Formation 1: deploy your ships in a grid half of the ship-base apart.

If you only want to remember one formation, this is it. This lets you perform the same maneuver on all of your ships without bumping.

When playing with the physical miniatures instead of online, your ships will get nudged and the maneuver templates are slightly imprecise. Over time, it can take your ships out of formation and cause bumps. The large ships should be fine, but the small ships can be quite sensitive to this. You can't space out the small ships more vertically since the deployment zone is 2.5 small ship-bases in width, but you can slightly shift the alignment of the front or back row to give the corners more space on the banks.

If you have both small ships and large ships, deploying them distance 1 apart will let you perform the same maneuver without bumping. However, this usually isn't the best option since the small ships move slower than large ships when performing the same speed maneuver. You'll usually want to deploy the ships distance 1/2 apart and perform maneuvers 1-speed faster with the small ships (see Formation 3).


Formation 2: With small ships, align the outside of the nub on one ship with the opposite edge on the front/back ship.

This formation also lets you perform the same maneuver on all of your ships without bumping. 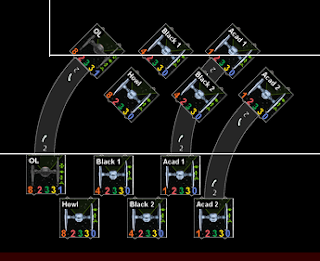 Be generous when lining up the outside of the nub with the edge. If you line up the edge against the nub, your back ships can run into your front ships when doing a straight maneuver after a bank maneuver. You may want to add a bit more space between ships and between the nub and ship edge when playing with the physical miniatures to account for any nudges or imprecise maneuvers.

This formation is useful when you want a vertically-compact formation for small ships at the cost of being more spread-out horizontally. If you deploy in the corner, the sixth ship will run into asteroids placed at range 2 from the board edge.

The pinwheel formation is a slightly tighter variation of this. Line up the back ship's nub against the opposite nub of the front ship: 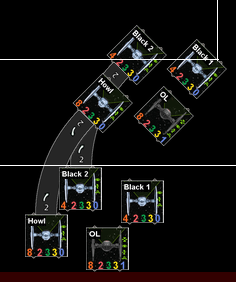 Formation 3: In mixed small/large ship squads, deploy your ships distance 1/2 apart. Your small ships must be against the front or back edge of the deployment zone.

Your small ships must perform maneuvers 1 speed faster than your large ships to avoid bumping. 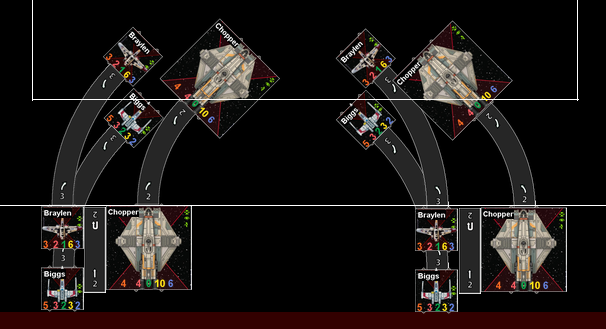 Again, you may want to slightly offset the small ships to give yourself more tolerance for nudges and imprecise maneuvers when playing with physical miniatures.

Since large ships move faster, you generally perform maneuvers 1 speed faster with small ships to keep up. This formation lets you do just that while keeping your ships in formation and is tighter than spacing your ships distance 1 apart.

If you want to perform the same speed maneuver with your small and large ships, they need to be deployed distance 1 apart.

If both are big ships, your first maneuver will be a 3-straight with the forward ship and a 2-hard turn with the back ship. This formation lets you fly one ship behind the other and do the same maneuver on both ships without bumping. 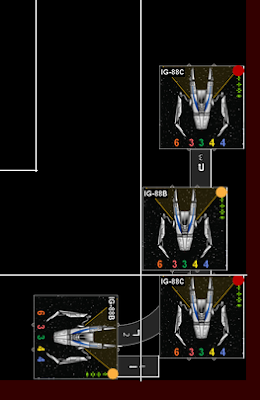 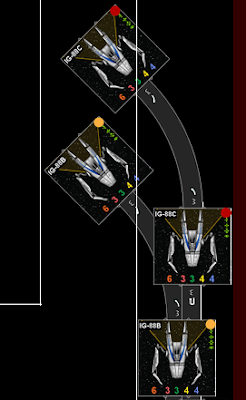 You can use Formation 1 and deploy two large ships distance 1 apart facing the same direction, but that takes up a lot of room horizontally. You might have trouble navigating past asteroids between your ships, and the inside ship may have to turn toward the board edge to engage enemy ships. This formation saves space horizontally and puts both of your ships near the board edge. The back ship will almost always be 1 range farther, which can be good or bad depending on your list and the target.


If the back ship is a small ship, your first maneuver will be a 2-straight with the big ship and a 3-turn with the small ship. 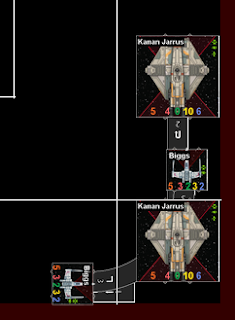 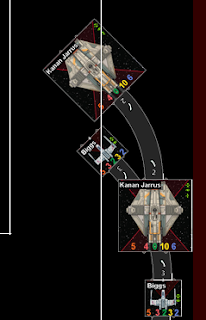 Why not deploy ships right next to each other?

Imagine deploying your ships side by side. They each take up 1 ship base in width. After a bank, they've turned 45 degrees. As we learned in high school, the diagonal is ~1.4x the ship's width so your ships won't fit. (You also won't be able to do hard turns because there won't be room for the nubs.)

There may be cases where you'd want to deploy ships right next to each other, but it'll be harder to fly them close together without bumping.


Why deploy your ships in a tight formation?

Focusing your fire on one enemy ship is very important in this game. It reduces the damage you take by killing enemy ships faster, and it's often the only reliable way to push damage through on tokened-up evasive ships. If you spread your ships out, there's a risk your opponent will rush down an isolated ship before your other ships can help it. It's also easier to fly your ships in formation as one "super-large" ship rather than fly your ships independently.

That said, there are reasons why you'd spread your ships out. For example, suppose you have a high-pilot skill ace with your group of jousting ships. If your ace deploys last and your jousters are deployed opposite to your opponent, you can deploy your ace in a flanking position to make it harder for your opponent to focus it down. This is especially true if your ace relies on avoiding enemy firing arcs; these ships don't want to be too close to your other ships. You may also have to spread your ships out if your game plan relies on killing one specific enemy ship first.

Keep in mind these formations are for deployment and pre-engagement moves. You may want to split ships off to block in the initial engagement, and your formation will inevitably break apart after the first turn or two of engagement.


Why deploy in the corner?

Lastly, deploying near the middle makes sense if you're playing against a list where you have to kill one ship first, especially if you have to deploy first. Deploying in the middle usually makes it easier to hunt that ship down, while deploying in a corner lets your target hide in or run to the opposite corner.

Deploy your low-pilot skill ships in front and toward the side you'll be turning.

These formations and principles are useful to know for your first games flying in a tight formation, and you'll probably use some variation of these in many of your future games. The best deployment will change based on what squad you and your opponent is running and on the obstacle placement. Don't be afraid to experiment with other formations and deployments! It's said that obstacle placement, deployment, and initial maneuvers can be as much as 33% of the skill in X-Wing, so this is a good thing to think about and practice.

The good news is deployment and initial maneuvers are relatively easy to practice. Set up some rocks in common places (e.g. range 2 x range 2, range 3 x range 3, or in the middle of the board) and see what maneuvers you can do while avoiding them. Pretend you're facing a common list and see if you can handle several different deployments (e.g. across from you, in opposite corner) and initial maneuvers (e.g. turn away, go straight, turn towards you, going fast, going slow).

Good luck and good flying! Please let me know if you have any other simple and useful formations.
Posted by Bohan at 9:57 AM 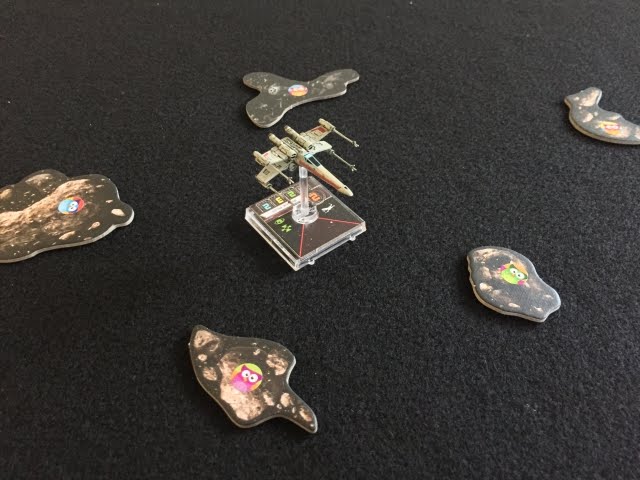